ProGun offers over 30 customizable presets to give your next action flick an extra flare. Select from either single or multi muzzle fires, each one with it’s own individual style. Customize your hue, saturation, opacity, blur, fire amount, and more. Each categories offers fun and easy to use published parameters built for you all with in Final Cut Pro X.

With ProGun, we give you on-screen controls to position and scale your gun fire along with on-screen controls for position, scale, and angle of your flash. Click and drag each point to the desired location. With in each category you have up to eight control points that give you the ability to control the flash back range that emits from your fire arm, all with a click of the mouse.

ProGun was professionally designed to work seamlessly inside of Final Cut Pro X. As a FCPX effect, the ProGun presets can be dragged and dropped onto your footage and previewed in real time without rendering. With easy-to-use controls that can be found in the FCPX inspector, you can calibrate your settings in a few clicks of a mouse.

Learn how to add and customize muzzle fire in your next FCPX project with the ProGun Lesson. 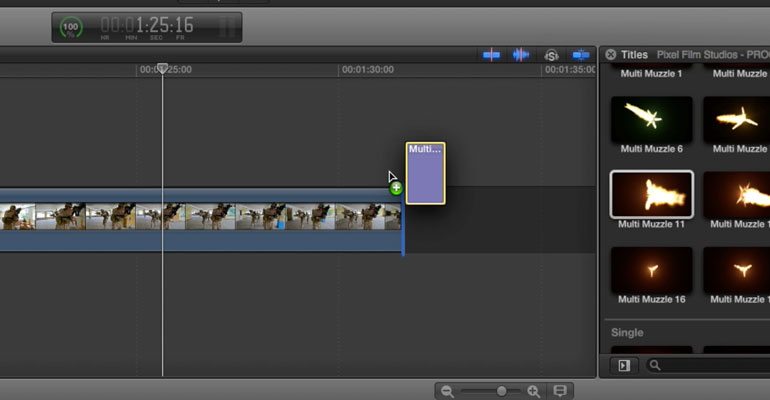 Let's begin by selecting a clip in the FCPX media library and dragging it to the timeline. Then, Move the playhead to where you want the gunfire to occur in the clip. Now, go to the titles library in FCPX, and scan through the PROGUN presets. Select the burst that best matches the gun in your scene. Drag the title layer above your clip onto the timeline so that it starts where the playhead is sitting. 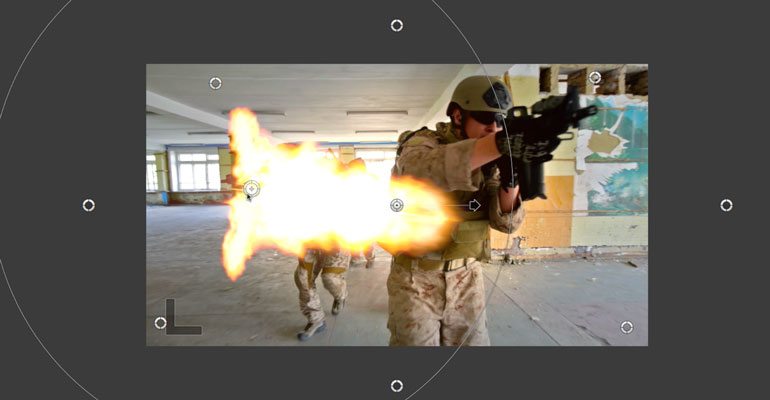 Now, we will need to position rotate the muzzle fire to where we want it. Grab the center puck in the Viewer window and move it so that it lines up with the chamber of the gun. Then click and drag the outer circle to adjust the size of the flame. Once you have the muzzle fire where you want it, go to the FCPX Inspector window and use the Left-Right and Up-Down parameters to pivot and rotate the fire so that it lines up with the end of the gun. For older versions of Final Cut Pro X, you may need to double click the refresh button in the Inspector window once you have finished making your changes. This will tell Final Cut Pro X to re-render your fire in it's new location. 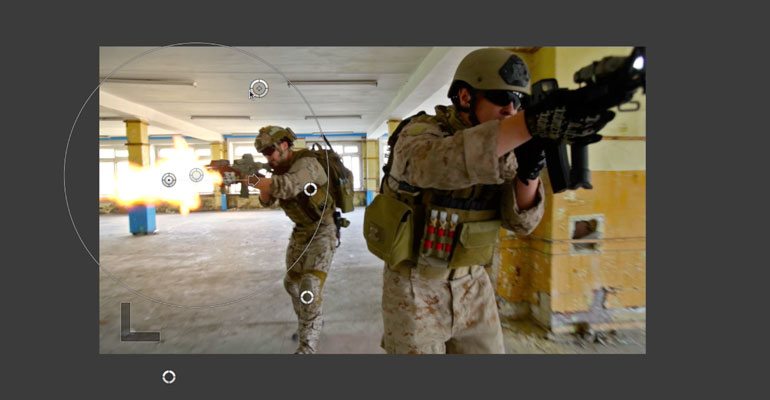 Now, let’s position and shape the light emitting from the fire so that it interacts with the environment in a realistic way. Click and drag the puck with the arrow attached it to move the center of the flash over the gun fire. Then, use the 8-points on the outside to select the area that flash will effect. For this example, we want the light to shine on the shooter’s front side, but not on his back or the wall behind him, so we will line up the points along the side of his body. 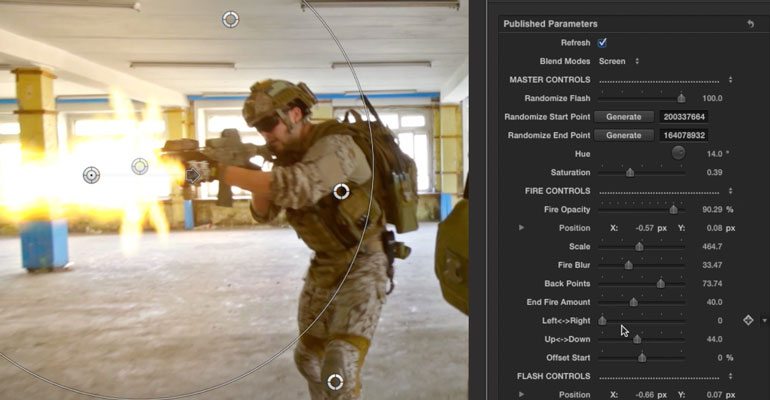 Now that the fire and flash are set in their desired locations, it's time to customize the look of them. First, change the blend mode that best works with the lighting in your scene. Then, adjust the Fire’s hue and saturation controls to your liking. Next, use the Fire Blur and Back Points parameters to control the texture and structure of your muzzle fire. Finally, adjust the color, brightness and softness of the flash. 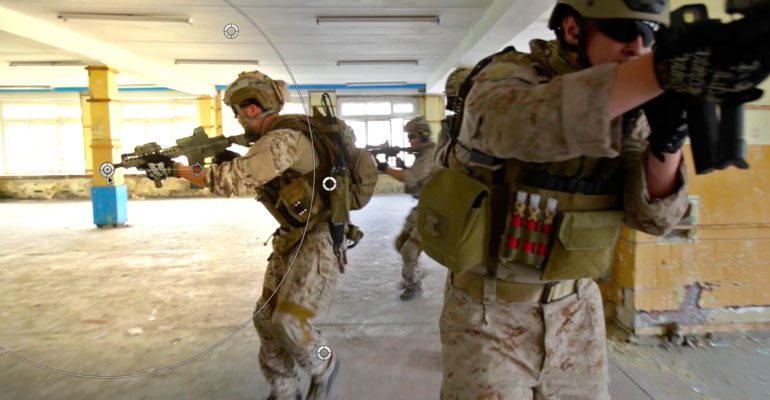 Next we will need to animate the gunfire to work with our scene. PROGUN is designed to automatically fire bullets over the duration of the title layer. If you want want your shooter to only fire a single bullet, you can click and drag the end of the title layer so that it is only 1 or 2 frames long. For this example, our shooter will fire a continuos round of bullets as he is moving through the room, so we will leave the title layer at its default length. But to ensure that the fire remains in the correct spot at all times, we will need to key frame the position of it. First, let’s place the playhead at the front of the muzzle fire title layer. Then, go to the Inspector window and turn the fire opacity to 0. This will help us see the end of the gun better as it moves. Now place a key frame on the fire position parameter. Move the playhead down the timeline 5 to 7 frames using the right arrow key on the keyboard. Now drag the on-screen control to the end of the gun as it moves around. Because this position is different than the previous frame … It will auto-keyframe in Final Cut Pro X. Continue this process every 5 to 7 frames until it is complete. Then turn the Fire opacity back to 100. You may need to repeat this step with the rotation parameters if the guns angle changes over the duration of the shooting. 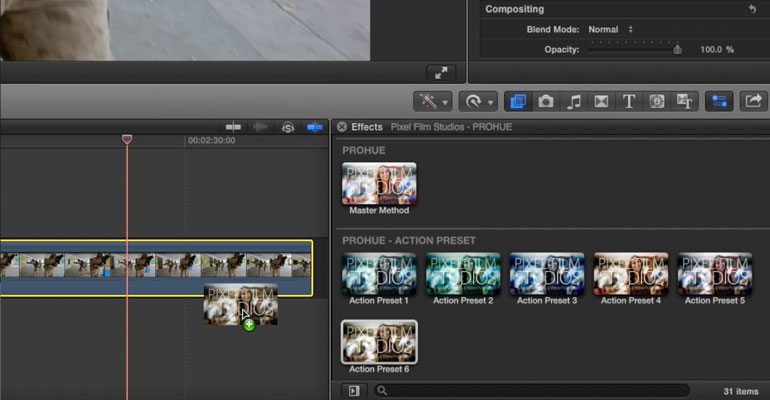 Now for some Final Touches. To help composite the gunfire seamlessly into the scene….. Compound your clip with all of the muzzle fire titles used in the scene. Select everything you stacked in the timeline, then hold control and click on one of the clips. Now select New Compound Clip in the pop-up. Next, Apply a color grade to the compound clip, it will make the gunfire and the shooter feel like apart of the same environment. For this example, we will use a Pixel Film Studios “ProHue” filter.

Where do I find ProGun?

Once the installation is complete, you can find ProGun in the FCPX Title library.