TranSpin is a set of customizable spin animations designed exclusively for Final Cut Pro. Seamlessly move from one scene to the next with drag and drop ease.

Intel graphics cards are not compatible with this plugin.

Get even more value with FCPX Transition Suite!

TranSpin offers over 200 animations with the option of selecting various in and out animation styles. With TranSpin users have complete customization over each transition giving each user endless possibilities.

Simple and Easy to Use

Any Resolution & with or without Motion Blur

Users can apply TranSpin within any project. With auto adaptation, TranSpin works with absolutely any resolution, aspect ratio, or frame rate. TranSpin also gives users the option from selecting from presets with or without motion blur with ultra-fast render speeds.

TranSpin was professionally designed to work seamlessly inside of Final Cut Pro X. As transitions, each TranSpin preset can be dragged and dropped directly onto media and previewed in real time. With the published parameters found in the FCPX inspector, users have the ability to make further adjustments with just a few clicks of a mouse.

What's in the package?

3 Movements, 3 Animation Styles, and Over 200 Possibilities

TranSpin 1.1 features a variety of different options. First, select a preset with either a bounce, ease or swing. Then, choose between animations such as flip and spin, spin, or tilt and spin. Select a directional animation and then spin rotation. Find the perfect preset for any scene.

After installing TranSpin 1.1, you will find it in the Transitions Browser of your Final Cut Pro X library. There are 18 presets to choose from. Each preset allows control over direction, spin amount, animation delay, and individual color channel distortion. 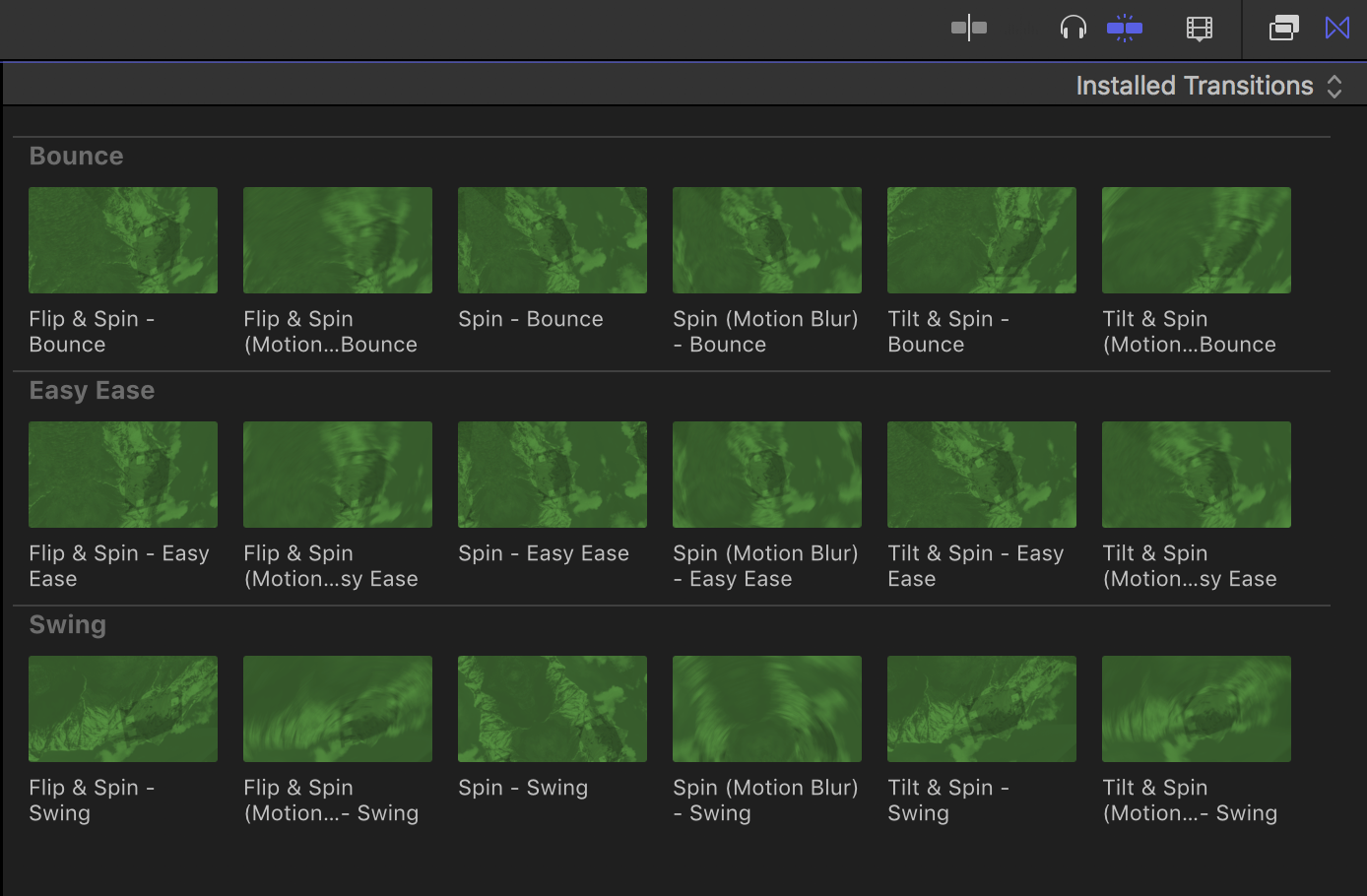 Select from presets with either with or without motion blur.

You may need to uninstall products if you want to make a fresh install or free up space. Watch this video to find out how.

Where do I find this plugin?

How do I apply this plugin onto my media?

Why do my render speeds take so long?

Having trouble applying your transitions?

This video will show you how to properly apply your transitions in Final Cut Pro and also go over how to fix common problems that you might encounter.

Is your plugin missing controls?

Watch this video to find out why.

Here's how to get a fresh/updated copy of this plugin.

Here are some reasons why and how to fix this issue.

Plugins not showing up?

I installed this plugin and see a Red Screen similar to this.

This means that Final Cut Pro is currently out of date.

Update Final Cut Pro. You can update by going to the app store.