With ProBlend users now have the ability to create a multiple exposure all with in Final Cut Pro X. Users have full customization over levels, softness, erosion, hue, saturation, contrast, luminance, colorization, threshold, and much more with a click of a mouse. With over 50 presets the possibilities are truly endless.

With ProBlend users now have the ability to replicate a double exposure with in Final Cut Pro X. ProBlend works with either video or image files allowing each user to stylize their media in a whole new way. Users have full control over color, levels, light, hue, saturation, contrast, and more all with a click of a mouse.

ProBlend gives each user full customization over levels, luma rolloff, softness, erosion, brightness, hue, saturation, contrast, smooth and luminance contrast, invert, threshold colors, colorization, and more. With ProBlend the possibilities are truly endless with a click of a mouse all with in Final Cut Pro X.

ProBlend was professionally designed to work seamlessly inside of Final Cut Pro X. As a FCPX effect, each ProBlend preset can be dragged and dropped onto the users media and previewed in real time. With the published parameters found in the FCPX inspector, users have the ability to make adjustments and stylize their very own stylized effect with just a few clicks of a mouse.

Learn how to composite one clip inside the shadows or highlights of another video with the ProBlend Lesson. 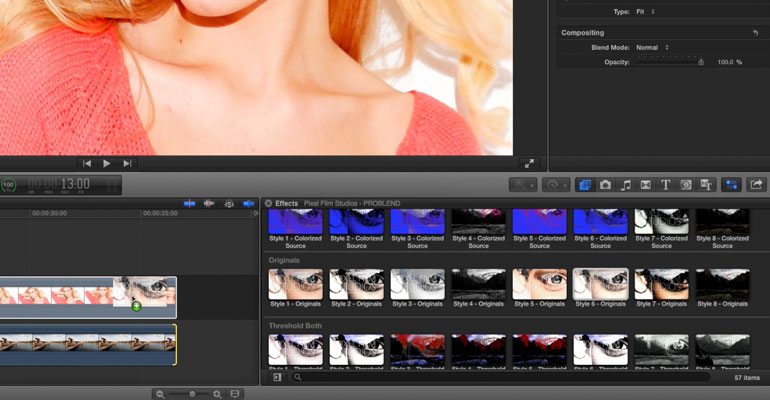 Let's begin by selecting two video clips or images from the FCPX media library and stacking them in the timeline and making them the same length. Place the layer you want to use to fill the shadows or highlights on the bottom. Once, you have your videos in the timeline, go to the FCPX effects library to locate the ProBlend presets. Scan through the blend styles and select the one that best matches the look you want. Then, drag the effect onto your top layer in the Final Cut Pro X timeline. For this example, we will use an Original preset, which keeps the original colors of the images. Select this layer in the timeline. Click on the drop zone placeholder in the Inspector. Then click on the lower layer in the timeline, and press the blue "Apply Clip" button in the FCPX Viewer window. Once the video is in the drop zone, you can discard it by deleting or disabling it in the timeline by pressing “V” on your keyboard. 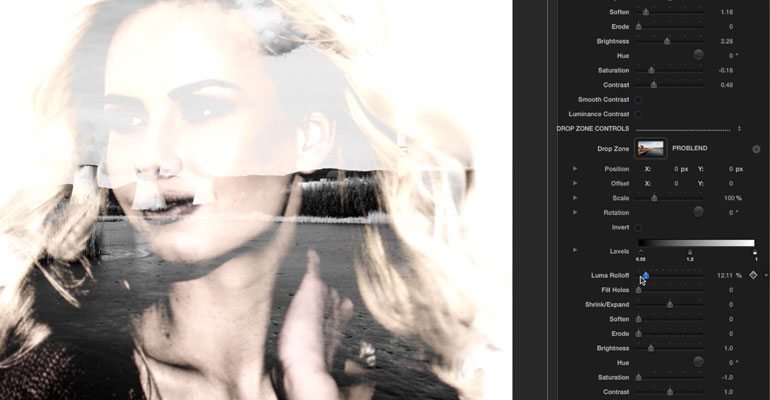 Now, let’s customize the look of our ProBlend effect. Select the ProBlend layer in the timeline and then go to the Inspector window. Use the Source controls to adjust the selection area for the transparency. If you rather see through the bright areas instead of the shadows, check the Invert button at the top. Once you have the fill area selection the way you want it, you can do the same with the Drop Zone controls. If you want the bottom layer to remain solid with no see through areas, you can turn the rolloff to zero. 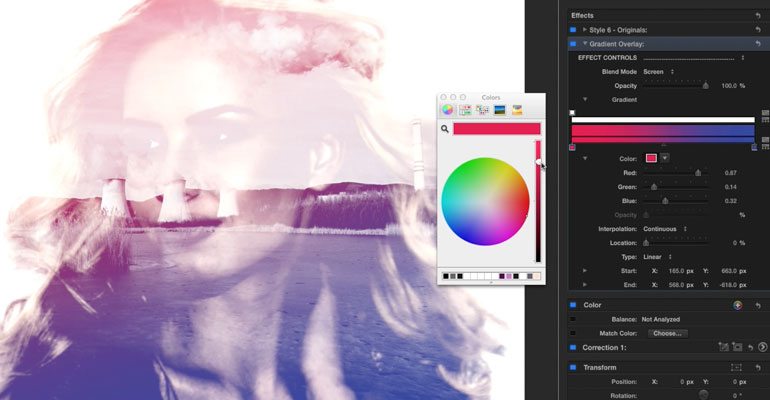 Now for Some Final Touches. To add a little extra style to our video let’s add a color gradient to our image. Use the Gradient Controls to adjust the colors, direction and opacity of the overlay. If you want to only apply the gradient to bottom layer, you will have to add the effect before you apply it to the drop zone.

What other plugins were used in the promo video?

No other plugin was used in this video.