Introducing PROSPLIT, a new screen split tool for FCPX. With PROSPLIT, Final Cut Pro users can split open their video clips to reveal titles, phrases, logos, or even other videos. PROSPLIT can be used for numerous styles of projects, from infomercials to title credits, and can be used with photos and videos!

With ProSplit from Pixel Film Studios, Final Cut Pro X users can reveal their film titles with style by splitting open individual shots with ease. Users have the ability to add text as well as logos and drop zones, allowing for background images.

A useful tool for Advertising and film alike

ProSplit can be used for any type of project. From montage scenes or opening title credits of the newest action film, to a commercial for the biggest retail sale of the year, ProSplit is so diverse, the options are endless.

ProSplit is built as an FCPX Title, so the effect can be applied more than once to video clips, overlapping each and adding new splits within splits. Great for multiple levels of information that can be applied to a single shot.

ProSplit is built as a title tool for FCPX. With unique on-screen controls that let users drag the splits around as well as adjust the size of each split, the options are infinite. With multiple opening directions, users can achieve multiple looks out of each shot.

Learn how to split open video clips to reveal titles, phrases, logos, or even other videos with the ProSplit Lesson. 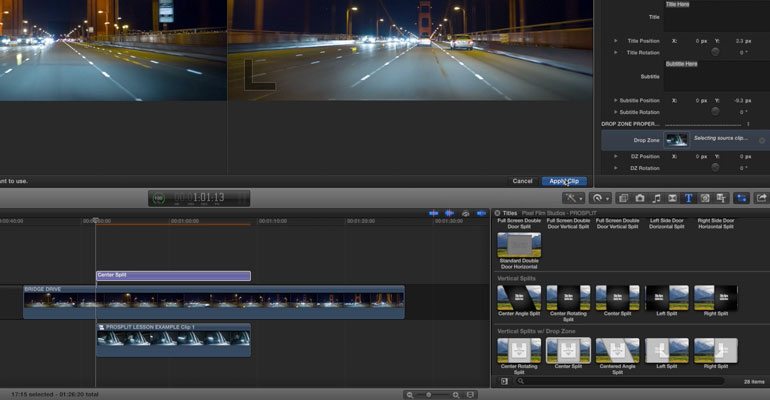 Let's begin by selecting a video clip or image from the FCPX media library and dragging it to the timeline. Once, you have your video in place, go to the FCPX titles library to locate the PROSPLIT presets. Scan through the split effects and select the one that creates the look you want. Then, drag the adjustment layer above your clip in the Final Cut Pro X timeline. For this example, we will use a preset with a drop zone placeholder. Drag the ends of title layer to where you want the effect to start and end in the timeline. Next, go to FCPX media library and select an image or video to use as the revealed media. Drag the image into the timeline beneath the split media layer and make it the same length. Once everything is lined up perfectly, you need to compound the video clip “by-itself”. This is a strange but necessary step since the 10.6 update to FCPX. Select the ProSplit Adjustment layer and go to the Inspector window. Click on the drop zone placeholder. Then select the compound clip as close to the beginning as possible, and click the blue "Apply Clip" button in the FCPX Viewer window. Once the media is inside the drop zone, you can discard the clip from the timeline. 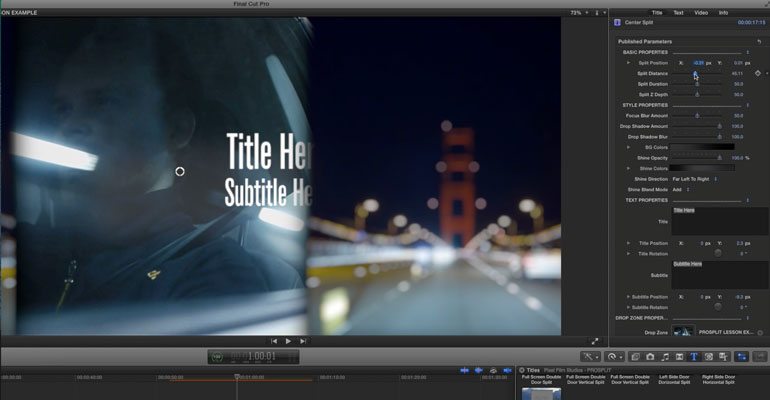 Now that we have our timeline setup its time to customize the orientation of our split. Select the adjustment layer in the timeline and go to the Viewer window. Click and grab the center on-screen control to adjust the position of the split animation. Next, use the Split Distance slider to control how wide you want your image to open up. Then, adjust the Split Duration slider to change the speed of the animation. Adjust the Depth slider to control how much you want the image to zoom in as it splits. Finally, use the “Split Angle” to change the rotation of the opening. 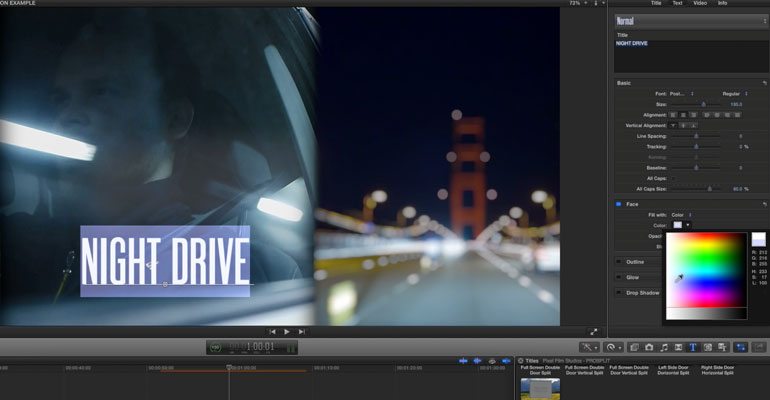 Now that we have our Split animation setup, let’s adjust the look of the media inside the opening. Go to the Text Properties Section of the Inspector window. Add your title and subtitle to the text fields. Then use the position and rotation parameters to adjust the orientation of the text. If you would like to adjust the font, size or color of your titles, you can double click on them in the Viewer to bring up the text parameters in the Inspector window. 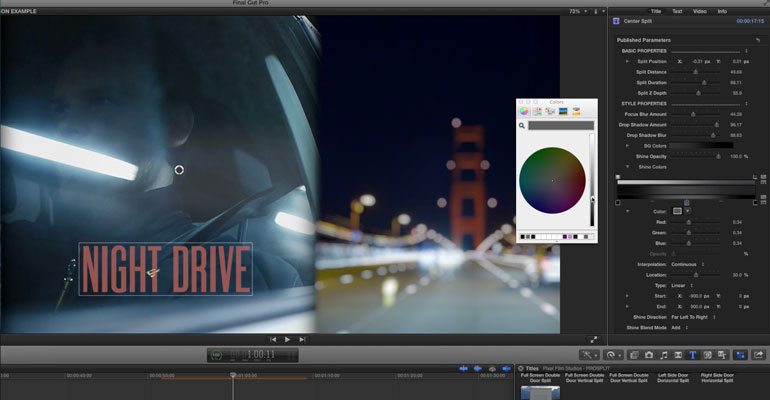 Now for some Final Touches. Let fine tune a few of the Style controls to finish off our look. Use the Focus Blur Amount slider to adjust the depth of field between the media layers. Then use the Drop Shadow controls to separate the layers even more. Since we have a background video instead of a color, we can ignore the BG Color gradient. Finally adjust the shine gradient colors, direction and blend.

Where do I find ProSplit?

Once the installation is complete, you can find ProSplit in the FCPX Title library.