Track text, logos, videos and animations to specific subjects in your footage with Auto Tracker!

Aliso Viejo, California – Pixel Film Studios new FCPX Auto-Tracker 2.1 software will be available on the company’s store this week. The original auto-tracker debuted two years ago and allowed users to track text and media by placing a selection box around the subject removing the tedious process of manually tracking frame by frame. The question is: What is the difference between the two versions?
It is easy to distinguish them from each other. While Pixel’s original tracker features were as impressive as those of other high-end two-dimensional trackers, Pixel Film Studios stood out by offering a cheaper solution to expensive tracking software from its competitors in the motion graphics industry. The latest version, 2.1, at a first glance looks entirely different than the original with a sleek new look in the published controls to the improved performance of the tracking, this version is a clear winner.

In motion graphics and video editing tracking tools are essential to saving editors time. While manual methods are still used by some editors, the use of tracking software removes the need for having to keyframe media manually. With the FCPX Auto Tracker, users can simply drop the plugin into the timeline and select and track the subject using the built in tracking software.

Apply tracked text, pictures, videos and animations to your footage with the help of the tracking software. Add an FCPX Auto Tracker preset to your footage, select an area and track! You can type in your custom text and even change it to 3D text in Final Cut Pro 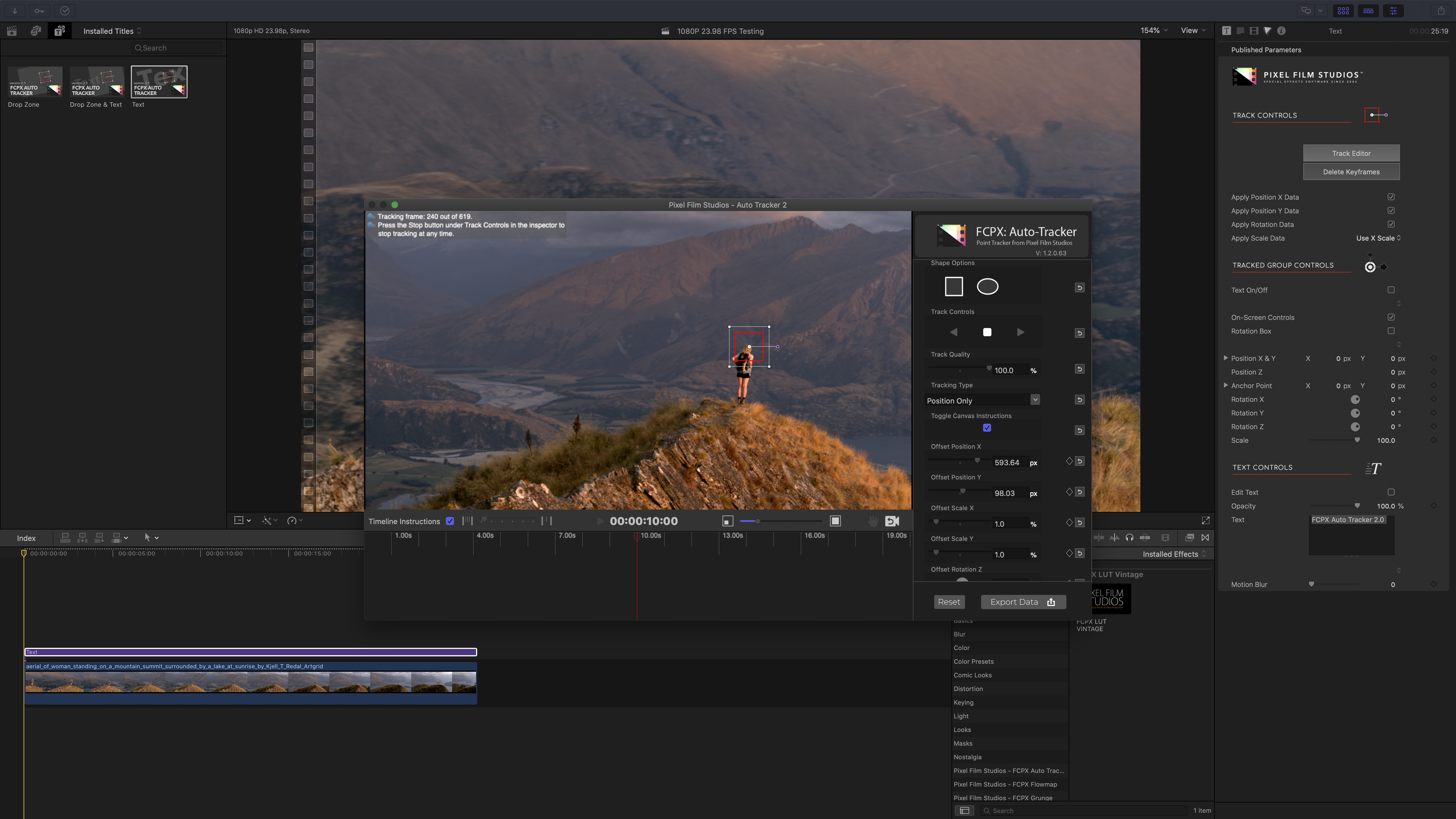 “The FCPX Auto Tracker has been completely revamped with a brand new interface and improved workflow!”

This year Pixel Film Studios has given their Auto Tracker an update that is more than meets the eye. The brand new Track Editor implemented into the FCPX Auto Tracker 2.1 software package gives users much more in depth control options. The Track Editor now has its very own pop up window that easily allows users to edit all of their track data in a comprehensive window.

The pop-up Track Editor window is designed to improve the tracking workflow and increase ease of use for all editors. The Track Editor can be opened with a simple click and features built-in instructions and tooltips to help guide you. The Track Editor also features its own timeline which allows users to easily manipulate their track data.

Compared to the tracking from FCPX Auto Tracker 1.1. version 2.1 has significantly improved tracking times. Then new track editor tracks footage anywhere from 2 to 5 times faster than version 1.1 depending on the settings you choose to track with. On average it is 4 times faster.

At a fixed price of $39.95, FCPX Auto Tracker 2.1 is available now at pixelfilmstudios.com. Additional product information, including system requirements, can be found on the product page here.